We implemented an advanced computer vision program to recognize floating plastic, which is also able to distinguish floating plastic from  marine creatures.  We are still improving the accuracy of the AI, and we believe this technology will be of great help to the autonomous navigation  of ClearBot in near future.

This article appears in the news of the HKU Engineering website.

A team of HKU students was among the five teams to represent China at the 2019 Global Grand Challenges Summit (GGCS) in London this September. Their project “ClearBot”, a system of AI vision enabled, self-navigating, self-charging, trash collection robots that collaborated as a swarm to collect ocean, stood out from four other teams from local universities and won the regional competition in Hong Kong.

The students were engineering students Woo Chung-yu (BEng(CompSc)), Utkarsh Goel (BEng(CompSc)), Ahmed Abbas Alvi (BEng(ME)) and Ma Jiacheng from the Faculty of Science. They were supervised by Mr. Sidhant Gupta, Dr Hayden So and Dr Kit Chui of the Faculty of Engineering and will be joined by two talented students, Padmanabhan Krishnamurthy (BEng(CompSc)) from the HKUST and Theresa Yip (BEng(CompSc)) from the City U to form a unified team to represent China at the GGCS 2019 Student Competition in London in September 2019. The team will be supported by Professor P.C. Ching, President of the Hong Kong Academy of Engineering Sciences (HKAES), and Mr Hugh Chow, CEO of ASTRI and Mr Johnny Chan, President of Hong Kong Venture Capital in preparing the final competition.

The Global Grand Challenges Summit features a student team competition of innovation, design, and business development based on themes related to a major challenge facing society and the planet every two years. A total of fifteen teams from China, UK and US will convene in London for a final competition in September 2019. They are expected to propose an innovation or novel approach to address aspects of the theme of this year’s summit “Engineering in an Unpredictable Way”.

It has been an absolute delight to work with such a diverse team of talented and passionate students to address some of the greatest challenges faced by mankind. We now live in a world confronted with global grand challenges that affect all of us regardless of who we are, where we come from, and what we do. It warms my heart to see a small team of undergraduate students, coming from different parts of the world, driven by nothing but their passion and dedication, are able to turn some of the most common technologies into ClearBot, and to imprint true impact to those who are most affected by the global plastic epidemic far away from home. It is truly engineering without border at its best.

Sidhant Gupta
Project Mentor
The University of Hong Kong
Clearbot was started with the intention of making cutting edge engineering available to the most vulnerable and exposed communities, hence giving them the tools to create global impact with their local effort. Our journey from inception, the first expedition and finally to the stage of the Global Grand Challenges Summit stands testament to the power of this concept and how, with the right team and support, we stand a fighting chance against the global plastic crisis. Our goal is to push ahead until we can sustainably use this system to remove 90% of the trash from our oceans.
Chung Yu Woo (Angel)
BEng (Computer Science)
The University of Hong Kong

Being a part of the team, I experience the power of technology in benefiting the community. There are so many problems in the world awaiting us to engineer the right solution. With Clearbot, our vision is that ocean conservation could become a collaborative effort instead of scattered attempts from various groups around the globe. We wish to harness technology to create a future which we can look forward to.

Working on ClearBot has been a thoroughly fulfilling experience. Taking it across three different countries, working over several months and collaborating with some of the brightest minds, ClearBots has taught me more than I could have hoped for.

My passion for Design and Product development, combined with a desire to solve pressing Global needs using engineering meant that ClearBots was the perfect opportunity to build a sustainable product with universal impact.
Having quite literally shed sweat and blood for this project, I look forward to seeing it deployed in the world's oceans

This article appeared in the South China Morning Post 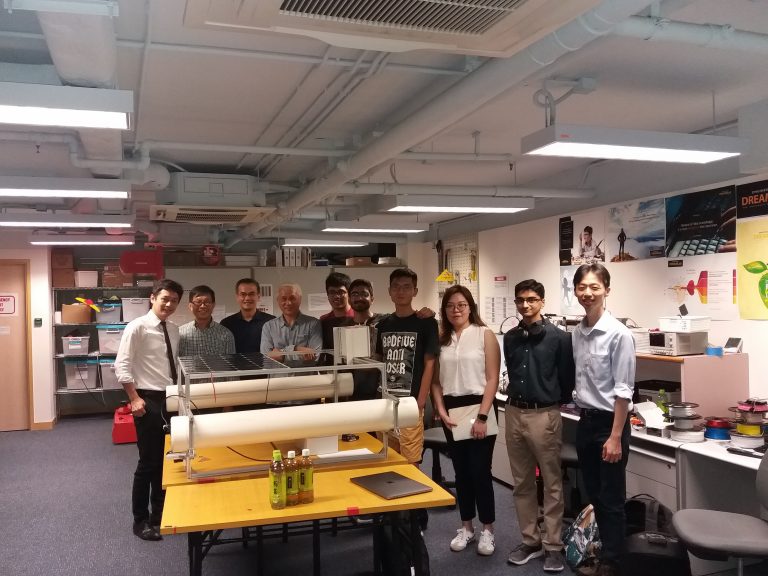 This article appears at the HKU press release

A student team led by the University of Hong Kong (HKU) was awarded 1st runner-up at the Student Competition of 2019 Global Grand Challenges Summit (GGCS) in London on September 13, 2019, where 15 student teams from around the world competed on solutions that address the worlds’ grand challenges in engineering.

The 2019 Global Grand Challenges Summit, co-hosted by the US National Academy of Engineering, the UK Royal Academy of Engineering, and the Chinese Academy of Engineering is the 4th in a series of biennial international event where world leaders, engineers, researchers, and entrepreneurs convene to share their views and innovations to sustain our future world. An important part of the GGCS is its Student Competition, where the best young engineering students from around the world address the questions “Can we sustain 10 billion people?” and “Will AI and other transformational technologies change humanity for the better?” with innovative solutions.

The HKU team first won the local competition organised by the Hong Kong Academy of Engineering Sciences (HKAES) among five universities from Hong Kong in June 2019 with an early prototype of “ClearBot”. The HKU team, comprised of Angel Woo Chung-yu (BEng(CompSc)) , Utkarsh Goel (BEng(CompSc)), Ahmed Abbas Alvi (BEng(ME)), Ma Jiacheng (BSc(ActuarSc)) and Sidhant Gupta (BEng(CE)), was coached by Dr. Hayden Kwok-Hay So of the Department of Electrical and Electronic Engineering, HKU through the support of the Tam Wing Fan Innovation Wing and the Gallant Ho Experiential Learning Fund. Upon winning the local competition, the HKU team was joined by Padmanabhan Krishnamurthy from the Hong Kong University of Science and Technology and Theresa Yip Man Yee from the City University of Hong Kong to form a Joint University Team of Hong Kong under the direction of Dr. So to compete as one of the China teams on the world stage.

The award-winning project, “ClearBot”, represents a truly multi-disciplinary solution that puts heavy emphasis on the relationship between technology and the people who are most affected by this plastic epidemic. From the initial experiential learning trip to Bali, to the open-source software/hardware development model, the development of “ClearBot” remains hinged on the belief that real-world impact can only be achieved by engaging the target communities at every step.

HKU Dean of Engineering Professor Christopher Chao was delighted about the remarkable performance of the team. He said: “At HKU Engineering, we focus in nurturing students with an all-rounded development. Students are encouraged to acquire hands-on experience and equip themselves with a global outlook. We are delighted to see our students’ achievements and growth in the international competition. The team truly demonstrated the power of collective wisdom.”

Dr. Kit Chui, Director of Tam Wing Fan Innovation Wing, said: “We emphasise on student experiential learning. It is definitely a remarkable experience for our students. We would also like to thank our donors, including Mr. and Mrs. Tam Wing Fan and our alumni for their supports throughout the project.”

Professor Ching Pak Chung, President of the Hong Kong Academy of Engineering Sciences (HKAES), said: “HKAES strives to pursue, encourage and maintain excellence in the entire field of engineering to useful purpose in order to promote the advancement of the science, art and practice of engineering for the benefit of the public. We always fosters education and training of engineers. The student team had joined forces from various universities in Hong Kong and representing China in the national competition. We are proud to see their outstanding achievements in the GGCS 2019 Student Competition.” 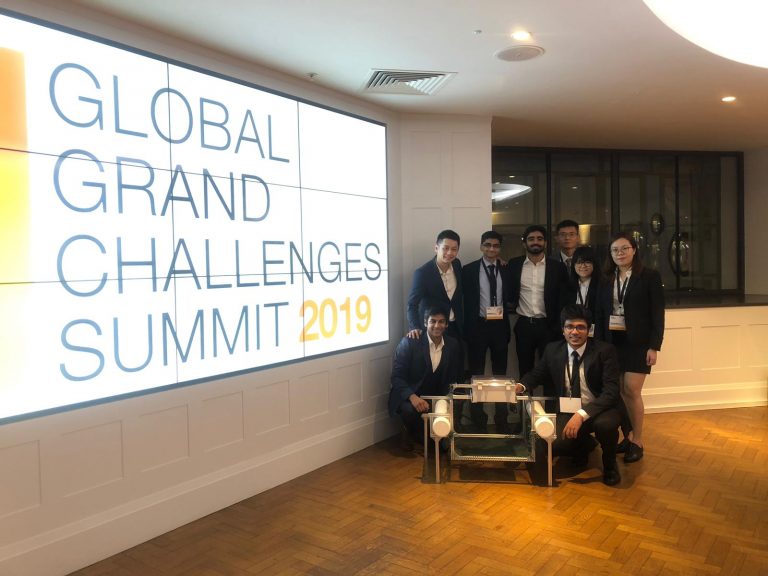 This project team was selected for the 1st runner up at the Global Grand Challenge Summit student competition held in London. The team is also the best performing team from China in this competition.

The Global Grand Challenges Summit features a student team competition of innovation, design, and business development based on themes related to a major challenge facing society and the planet every two years. A total of fifteen teams from China, UK and US will convene in London for a final competition in September 2019. They are expected to propose an innovation or novel approach to address aspects of the theme of this year’s summit “Engineering in an Unpredictable Way”. 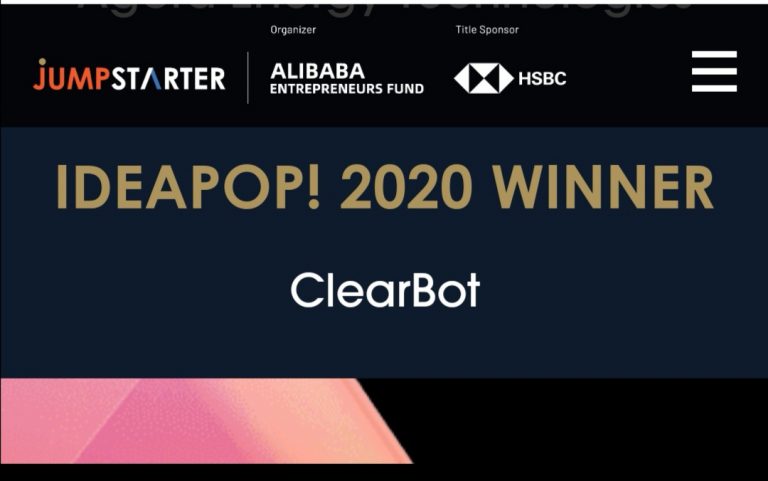 This project team is the IDEAPOP! 2020 winner at Alibaba Entrepreneurs Fund/HSBC JUMPSTARTER 2020 Global Pitch Competition, which is one of the world’s biggest startup competitions.

Open to all university students, JUMPSTARTER IdeaPOP! identifies, nurtures and mentors a pool of business elites with an entrepreneurial mindset.

Members of the Clearbot project team in HKUEAA Annual Dinner