Background of the project

The Design, Build & Fly (DBF) is a regular capstone design project under the Department of Mechanical Engineering. Every year, many ME students show a very strong enthusiasm in this project and our department encourages them to participate in different international competitions. Many student competitions are based on solving “real” cases and problems. By participating in a competition, it helps students to build up links between thinking and doing so that they learn to apply theories into practice with a deeper understanding of the concepts.

In the past four years, our DBF teams participated in the Taiwan Innovative Unmanned Aircraft Design Competition. In 2016, we got awarded 1st runner up, The Best Aerodynamic Design Award and The Best Report Award. In 2017, we got the Highest payload award as well as the 1st runner up of the Advanced Engine Plane Design. In 2018, we got the 2nd runner up award in the British Model Flying Association 2018 University and Schools Flight Challenges.

In April 2019, one DBF teams of the ME department participated in the “AIAA Design Build Fly Competition” in which students are required to design, fabricate and demonstrate the flight capabilities of an unmanned, electric-powered, radio-controlled aircraft representing real-world aircraft and aerospace design challenges. The Hong Kong Air Cadet Corp (HKACC) and The Hong Kong Model Engineering Club Limited (HKMEC) were invited to provide technical support to the team.

The competition is held by the American Institute of Aeronautics and Astronautics in April 2019. Competing teams are required to design and build a RC plane that can carry the highest payload with the highest speed as well.

From August 2018 to May 2019, under the supervisor (ME, HKU) and the advisor (HKACC), students went through the fundamental engineering design process: identifying the problems, developing conceptual designs, building computer models, optimizing their designs with finite element analysis (FEA) and computational fluid dynamic (CFD) software, learning practical RC plane building technique, working out the physical prototype, evaluating the performance and refining their design recurrently.

From 8-10th April 2019, after arrival, our teams assembled the RC plane and did ground testing in the carpark of the hotel. Necessary adjustment and repairing were done in the hotel. Our teams also searched for RC component shops and airfield in Tucson for flight test. Our teams did different flight tests in the nearby airfield and made all necessary modifications and adjustments.

From 11-14th April 2019, our team took part in all missions and finish one by one accordingly. The contest theme this year was Aircraft Carrier Operations. Each aircraft was required to have a 4 foot minimum wing span. To simulate the transition from the hanger to the flight deck, the aircraft were required to roll through a 3 foot x 2 foot box necessitating wing folding and locking mechanisms which had to operate remotely and without external assistance. The aircraft were required to complete three flight missions, each taking off from a 4 foot by 10 foot “carrier flight deck”.

On 11th April 2019 morning, the 1 st day of competition, our teams passed all official inspection and earned a ticket to other missions.

Before departure from Tucson, we had a visit to the Pima Air & Space Museum to get close look to different types of airplane in the history.

There were 104 teams submitted design reports to be judged, and 77 teams (over 800 students) attended the fly from all over the world. Three teams came from Hong Kong, HKU, HKUST and HKPU. Honorably, our team could finished all the missions and got the 13th rank which is the best result Hong Kong teams ever made in history. It was the first rank among teams from East Asia.

This was the first time our team participating the AIAA competition. The airfield condition was not that good for flying as the side wind is quite strong during the competition period and it caused many RC plane to roll over in the taking off process. Our team carefully fine tuned our plane many times and finished all missions by the end. There were different types of failures in different teams and they became challenges for all participants involved in the competition. After discussions with many team leaders, almost all teams agreed that the most challenge parts of this competition were battery management, foldable wing design and short take off runway. As NiMH battery were allowed only in the competition, energy capacity problem and overheat problem became a big burden to many teams. In the second trail of 1st flight mission, our plane suffered from battery overheat problem and seriously affected our performance. Moreover, minor misalignment due to shipping may cause the failure of the folding mechanism design, and the strong side wind also induced a big difficulty to the take off process. By the end, our team overcame the difficulties and finished all the mission.

During the four days competition, our team members communicated and exchanged ideas with other teams, say, the design concerns, the selection of propellers, validity of different CAD software, weight minimization methods, folding mechanism, battery management, sourcing of components. Students recurrently went through a series of brainstorming sessions, rapid problem solving sequences during the competition. After fixing battery overheat problem, wing folding misalignment problem, our planes could adapt to all missions, take off and fly successfully as designed.
Future plan

In the next academic year, our department will have three DBF teams. 2 teams will aim at the BMFA competition in British while 1 team will aim at the American Institute of Aeronautics and Astronautics (AIAA) Foundation/Cessna Aircraft/Raytheon Missile Systems Design, Build, Fly Competition in USA. 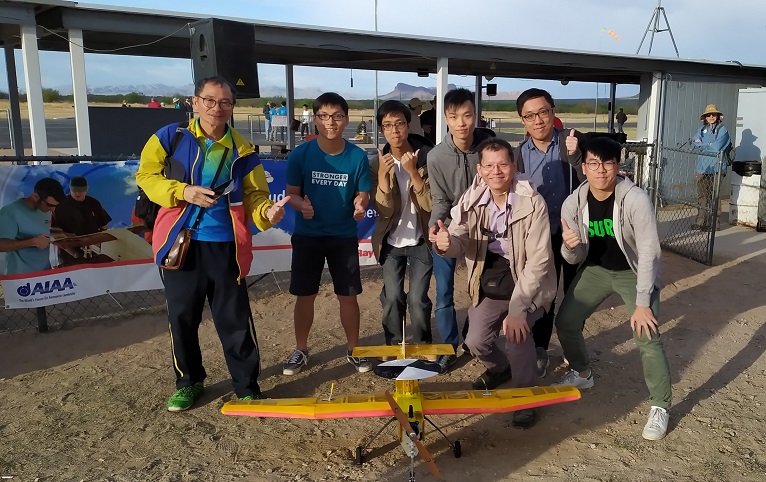 RC aircraft model has a major difference from other design, e.g. robot. As parking is not an option during flying, any small mistake will lead to a total destroy of the model. Every subsystem is essential to a successful flight, say, the plane cannot take off without a good ground steering system even though an excellent wing is design. An engineer should develop a conscientious and meticulous manner in any job.

Albert Einstein quoted: “Everything that can be counted does not necessarily count; everything that counts cannot necessarily be counted”. The most important thing to note is that the competition journey is a process, not an endpoint. Any one success (or apparent failure) is just another stepping stone to the next point along the way

“Yet despite being the first in HKU history to enter this contest, HKU finished all missions and ranks 13th out of all 104 international teams, which is yet another first in Hong Kong history. HKU also ranks the first out of all Asia Pacific teams, which include other delegations from Thailand, Singapore, Beijing, and Hong Kong.”

“Through this contest, I learned much more about engineering and design. Aircraft design, different from other product design, relies on both form and function. Only with perfect form, aircraft can fly with minimal drag and highest efficiency; and only with simple but sensible design, various mechanisms on aircrafts can perform reliably and satisfactorily. Rapid prototyping with simplified structure proved to be essential and efficient in design iterations, as the results offer directions to the next iteration and shed light on failure risks.

The quality this year’s contest tested the most out of all teams is perseverance. As we gather from the competition ground, nearly all present teams, including those superseding us in results, had suffered repeated test flight crashes till the last days. Yet we all overcame not only imminent deadlines and engineering conundrums but also the sensical loss in faith in oneself. Despite most other teams had manpower twice to five times more than ours, we were still able to compete like we were on a level playing field and achieved the highest ranking Hong Kong Teams have ever achieved.”

The “Design, Build and Fly” Team of Department of Mechanical Engineering participated in the “23rd AIAA Design Build Fly Competition” in the U.S.A. and ranked 13th among 104 eligible teams, which is the best ever result of Hong Kong teams since 2013.

Each team is required to complete a timed ground mission demonstrating full carrier operations and capable of completing three missions, including Delivery, Reconnaissance and Attack. The team successfully completed all the three missions and was ranked 13th in the competition. This is the best ever result among the teams from Hong Kong and is the best result in East Asia.

“It is our first time joining the most influential aircraft model competition in the U.S.A and we are very delighted to get the best ever result among the Hong Kong teams,” said by Professor Christopher Chao, Dean of Engineering, “In HKU, we emphasise experiential learning and we always encourage students to actualise their idea through hands-on projects in which they can “learn by doing”. It definitely sets a good example for their fellow classmates.”

Dr C.K Chan, the supervisor of the team, felt proud of the students’ achievement and said, “This competition meant a lot to the students. It is meaningful and eye-opening for the students to compete and communicate with other teams from top-notch universities on-site. We must thank the University and family members for their support, without which we would not be able to succeed.”

The “Design, Build and Fly” competition was organised by the American Institute of Aeronautics and Astronautics (AIAA) in which students are required to design, fabricate and demonstrate flight capabilities of an unmanned, electric powered, radio-controlled aircraft representing real-world aircraft and aerospace design challenges. It is the most influential aircraft competition in the States and attracts teams from renowned institutions such as MIT and UCLA to join the competition.