Supervisor: Dr. Hayden So (Department of Electrical and Electronic Engineering)

Background of the project

Our project “ClearBot” is a project where we intend to develop a water-cleaning bot for tackling the water pollution problem of communities worldwide. In today’s world, the extended use of plastic and other non-biodegradable materials continues to worsen and impact earth’s ecological systems which supports human existence.

Indonesia follows the suit of other big countries facing the immense issue of water pollution, with Bali quoted to experience the water-plastic pollution ‘on a scale never seen before’ (source: ABC News). Our water-cleaning bot named “ClearBot” integrates simple ideas across different functional areas to produce a semi-autonomous robot which cleans water through discrete human control. Not only will our bot enhance the efficiency of water-cleaning services, the low prices of these bots (estimated to be around 16,000 HKD) will compliment us with the scaling-up operations as well.

A team of HKU students was among the five teams to represent China at the 2019 Global Grand Challenges Summit (GGCS) in London this September. Their project “ClearBot”, a system of AI vision enabled, self-navigating, self-charging, trash collection robots that collaborated as a swarm to collect ocean, stood out from four other teams from local universities and won the regional competition in Hong Kong.

The students were engineering students Woo Chung-yu (BEng(CompSc)), Utkarsh Goel (BEng(CompSc)), Ahmed Abbas Alvi (BEng(ME)) and Ma Jiacheng from the Faculty of Science. They were supervised by Mr. Sidhant Gupta, Dr. Hayden So and Dr. Kit Chui of the Faculty of Engineering and will be joined by two talented students, Padmanabhan Krishnamurthy (BEng(CompSc)) from The Hong Kong University of Science and Technology and Theresa Yip (BEng(CompSc)) from City University of Hong Kong to form a unified team to represent China at the GGCS 2019 Student Competition in London in September 2019. The team were supported by Professor P.C. Ching, President of the Hong Kong Academy of Engineering Sciences (HKAES), and Mr. Hugh Chow, CEO of ASTRI and Mr. Johnny Chan, President of Hong Kong Venture Capital in preparing the final competition.

The GGCS features a student team competition of innovation, design, and business development based on themes related to a major challenge facing society and the planet every two years. A total of fifteen teams from China, UK and US will convene in London for a final competition in September 2019. They are expected to propose an innovation or novel approach to address aspects of the theme of this year’s summit “Engineering in an Unpredictable Way”.

Each team was required to complete 3 rounds of flying during 2nd and 3rd day: No payload in 1st round while a payload weighted up to a maximum value of 2kg and 4kg in the 2nd and 3rd round respectively. Our teams completed all the tasks and our design achieved the performance as expected. 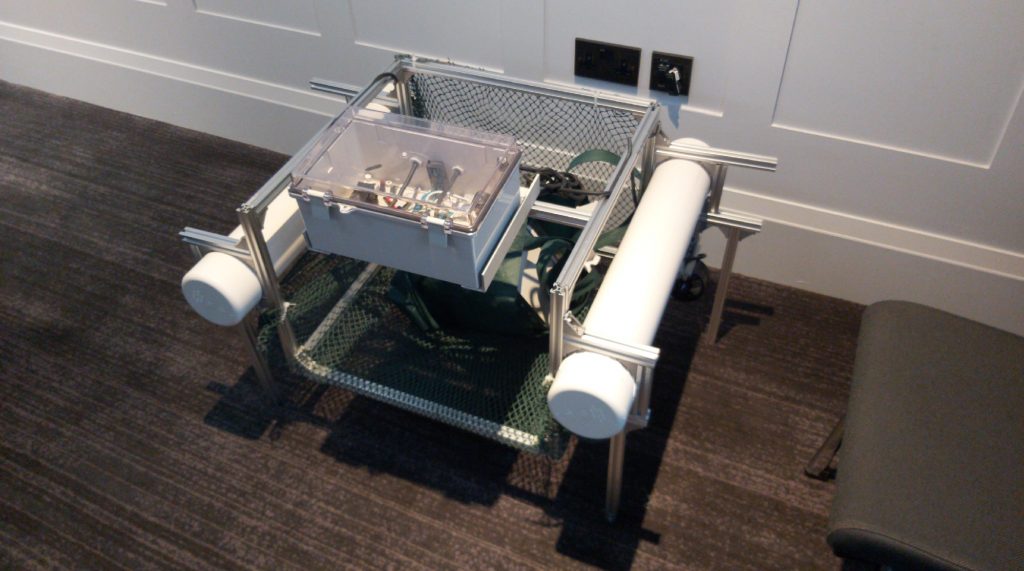 Students recurrently went through a series of brainstorming sessions, rapid problem-solving sequences during the competition. After fixing the wheel friction problem, steering problem, our planes could adapt to the runway, take-off and fly successfully as designed.

The team is going to continue the project until more impact can be made.

It has been an absolute delight to work with such a diverse team of talented and passionate students to address some of the greatest challenges faced by mankind. We now live in a world confronted with global grand challenges that affect all of us regardless of who we are, where we come from, and what we do.

It warms my heart to see a small team of undergraduate students, coming from different parts of the world, driven by nothing but their passion and dedication, are able to turn some of the most common technologies into ClearBot, and to imprint true impact to those who are most affected by the global plastic epidemic far away from home. It is truly engineering without border at its best.

“Being a part of the team, I experience the power of technology in benefiting the community. There are so many problems in the world awaiting us to engineer the right solution. With Clearbot, our vision is that ocean conservation could become a collaborative effort instead of scattered attempts from various groups around the globe. We wish to harness technology to create a future which we can look forward to.“

Three “Design, Build and Fly” teams from the Department of Mechanical Engineering dominated the Payload Challenge 5 of the British Model Flying Association (BMFA) 2019 University and Schools Flight Challenges. They won the champion, 1st runner-up and 3rd runner-up respectively after three days of competition.

The British Model Flying Association 2019 University and Schools Flight Challenges was held in BMFA Buckminster, Sewstern Lane, Grantham, Lincolnshire, NG33 5RW from May 31 to June 2, 2019. With the technical support from the Hong Kong Air Cadet Corp (HKACC) and the Hong Kong Model Engineering Club Limited (HKMEC), our teams competed the 2019 Payload Challenge 5 with other 14 teams from all over the world, including UK and USA.

Competing teams were required to design and build a radio controlled (RC) aircraft using the specified design and equipment parameters, capable of carrying the specified liquid payload. Contestants should design their aircraft to maximise the value of the ratio “payload/aircraft empty mass”. Apart from submitting a technical report for the aircraft’s design and construction with design drawings and a verbal presentation, teams were required to complete three rounds of flight missions. Each aircraft was required to complete a flight without any payload in the first round. Then the payload was increased to 2kg and 4kg in the second and third round respectively. After three days of competition, our teams completed all three missions successfully and team #4, #3 and #2 won the champion, 1st runner-up and 3rd runner-up respectively.

Dr C.K Chan, supervisor of the teams, was proud of the excellent performance of the teams. He remarked, “It was not only a competition, but also an eye-opening experience for the students. They had chances to communicate and exchange ideas with other teams on design, selection of propellers, validity of different CAD software, weight minimization methods, payload loading and unloading mechanism, sourcing of components, etc. We are grateful to have such valuable experience and we thank the University for supporting us. ”