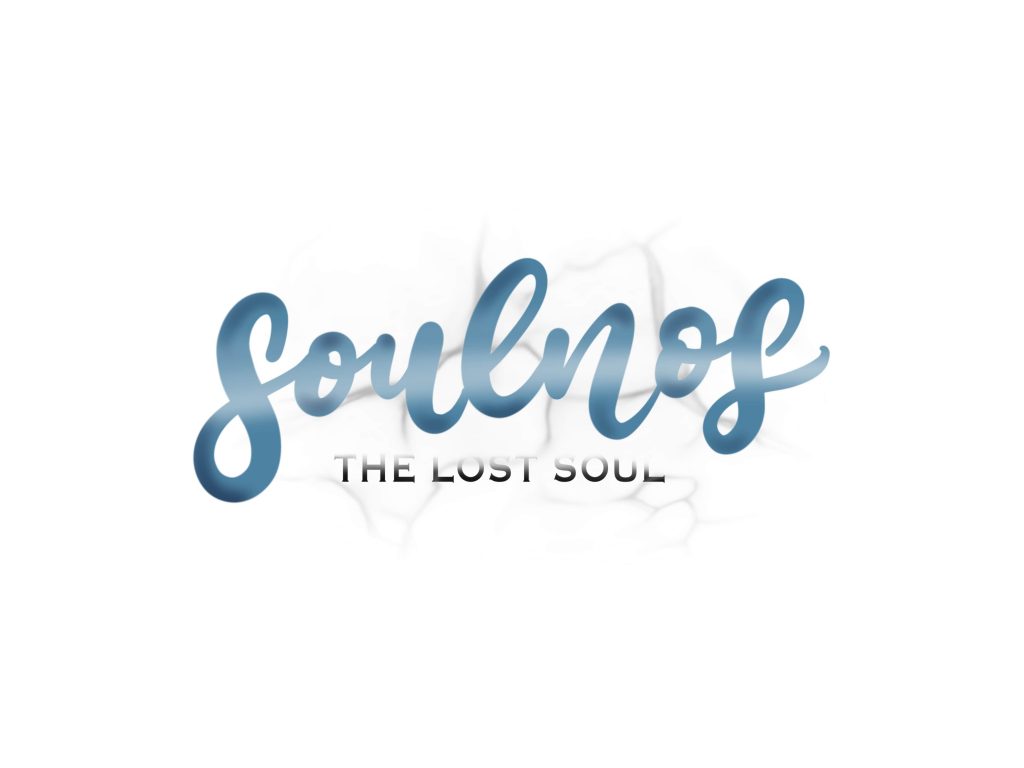 Soulnos – The Lost Soul is a 2D single-player platform game, which player controls two characters to clear every stage. In game, player will face various challenges, including two kinds of monsters, and four kinds of traps. As the movements of the two characters are synchronised, player needs to control the characters smartly to avoid dangers in every stage. Both characters can make a melee attack to kill the monsters in the game. In addition, boosters may exist in each stage, assisting the player to clear the stage. Four kinds of booster, including jump boost, speed boost, healing boost and ranged attack boost are included. When the game is progressing, hints will be revealed to player and player will know more about the truth. 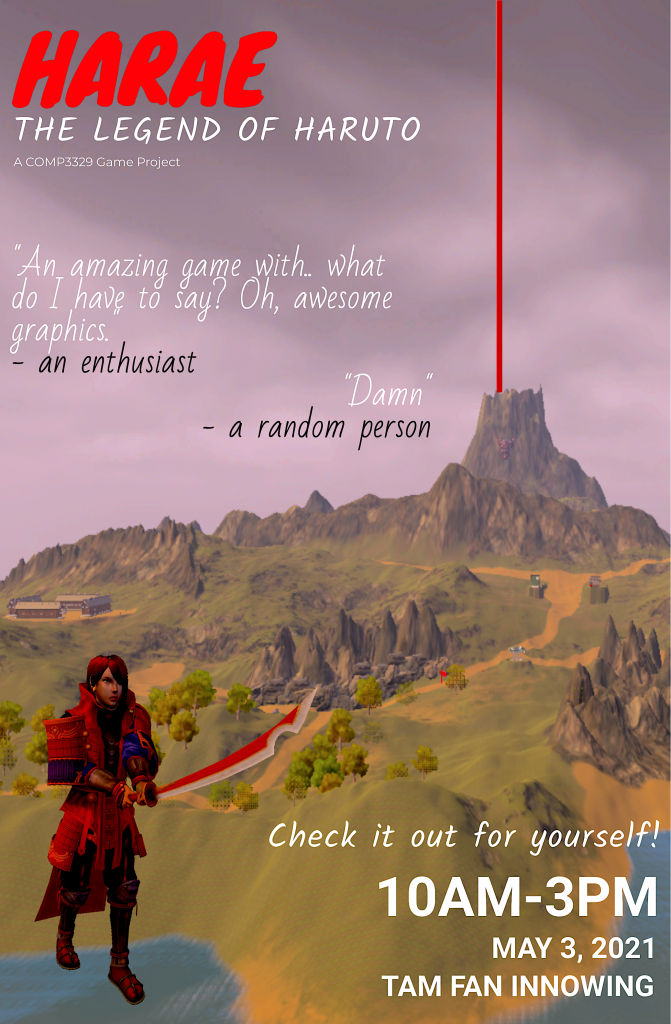 Harae – The Legend of Haruto”” is an open-world, Action RPG game inspired by games such as “”TES V: Skyrim””. The story is set in a post-apocalyptic world where robots have taken over humanity by unleashing a deadly plague onto the world. Haruto, the protagonist, seeks to save human-kind by destroying the robots’ source of power, located on his birth-island.
The goal of this project was to create as lively, detailed, and performant a game as was possible in the short development time that was given for COMP3329, and it will continue to see updates even after the semester is over. 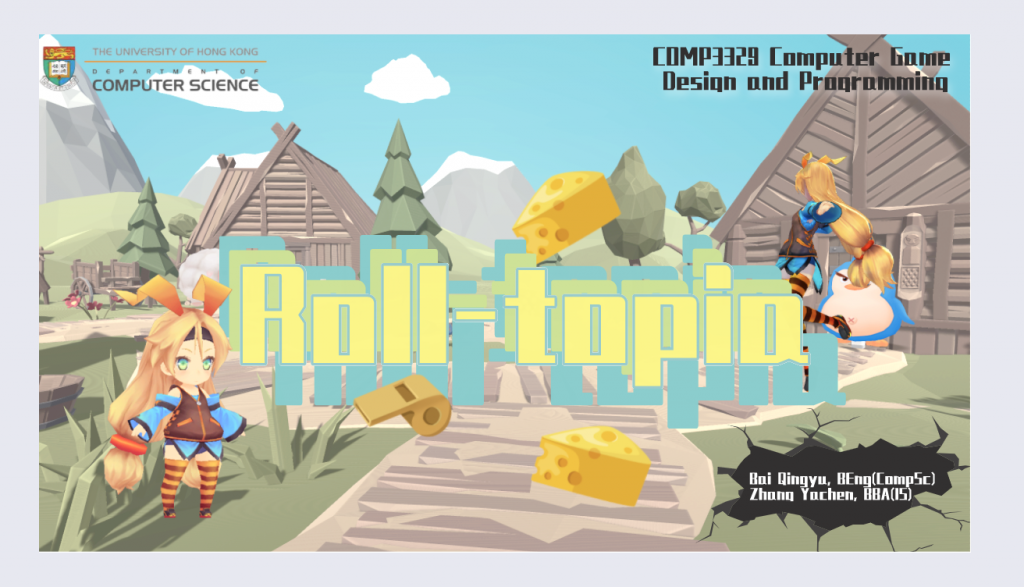 This 3D platformer running game is about a girl falling into a dream which guides her into a world called Roll-topia. In the communication with the residents of the local villages, she learned that the villagers were frustrated with the invaders who destroyed their houses. As a result, she decided to kick up the invaders. She uses cheese to attract attention to the greedy mice on the way to protect herself. In the end, she surprisingly arrived to the beginning point, only to find out this world is in the shape of a hamster wheel. 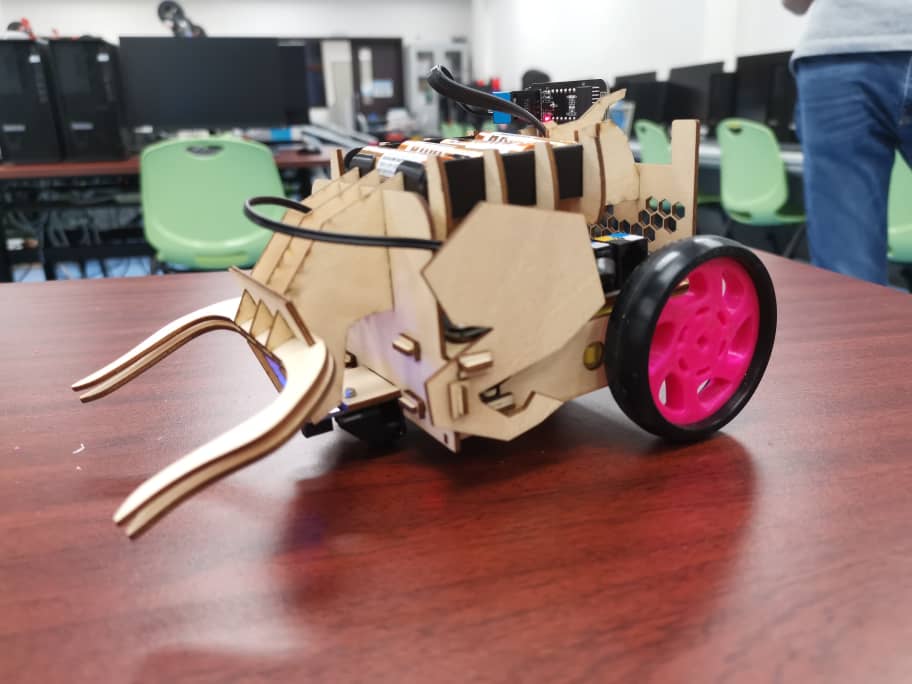 This is a remote-controlled robot designed to play soccer matches against other robots. It is a product aimed at teenagers learning STEM education. Our design is inspired by the shape of a charging bull, which makes it more attractive to our target audience. The robot is made from mBot parts, laser-cut wooden panels, and 3D printed wheels. It is assembled using only a few screws due to our use of interlocking mechanisms integrated into the panels. The robot includes an optical sensor, and displays the number of times it crosses a black line on the seven segment display on the back. 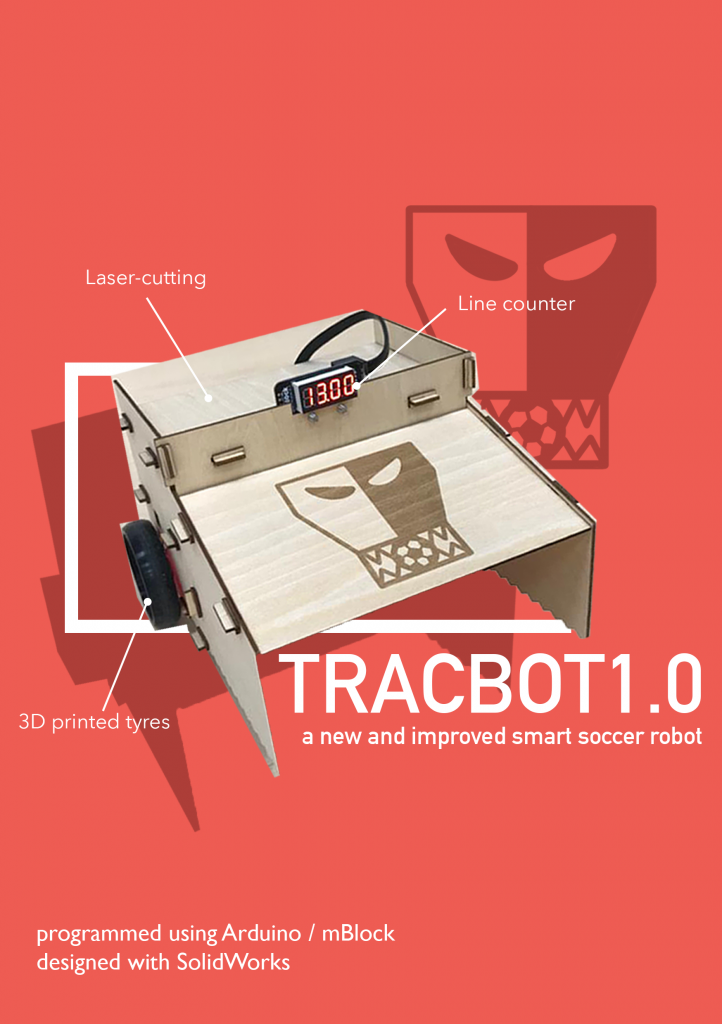 Our product is a smart soccer robot that is primarily used to revolutionise the technical education industry. We designed it on SOLIDWORKS, being very careful regarding technicalities like the position of the centre of gravity and weight distribution. The materials are all environmentally friendly so that we fulfil our ethical responsibility of keeping the environment clean. The robot’s design allows it to “engulf” the ball, keeping it secure for as long as necessary. The precise mBlock programming allows it to be manoeuvred professionally. Both of these features, when coupled together, make it quite a useful product in terms of efficiency. In addition to dominating on the field, it can also serve purposes like spreading the influence of STEM education by making it more fun and stimulate students to work in teams and think critically. 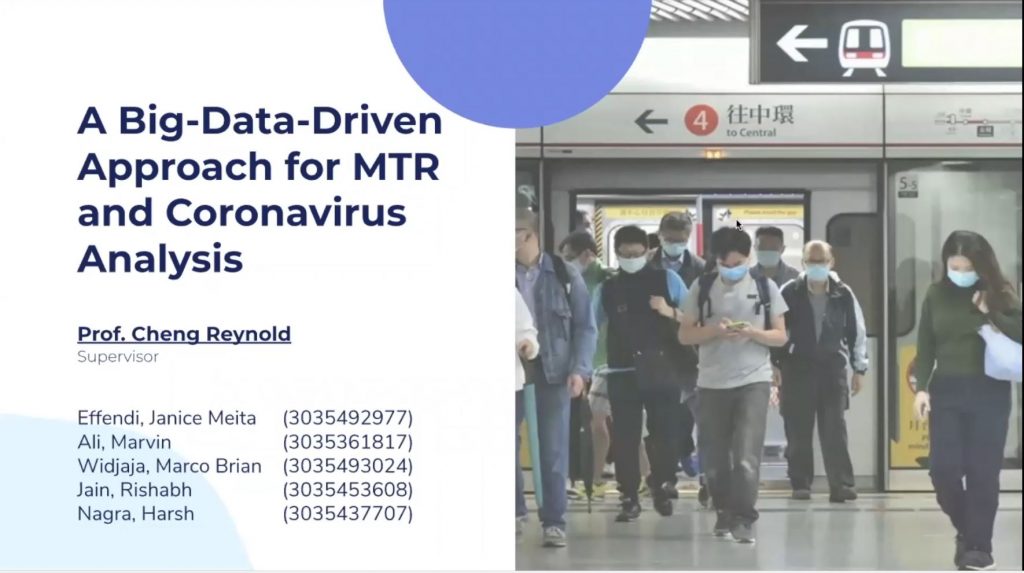 This is a Big-Data project catering to the needs of researchers at The University of Hong Kong. This project’s implementation in the form of a web-based system that enables easy flow of data-retrieval, visualization, and analysis that would fuel research into the fields of COVID-19 spread and MTR passenger behavior. 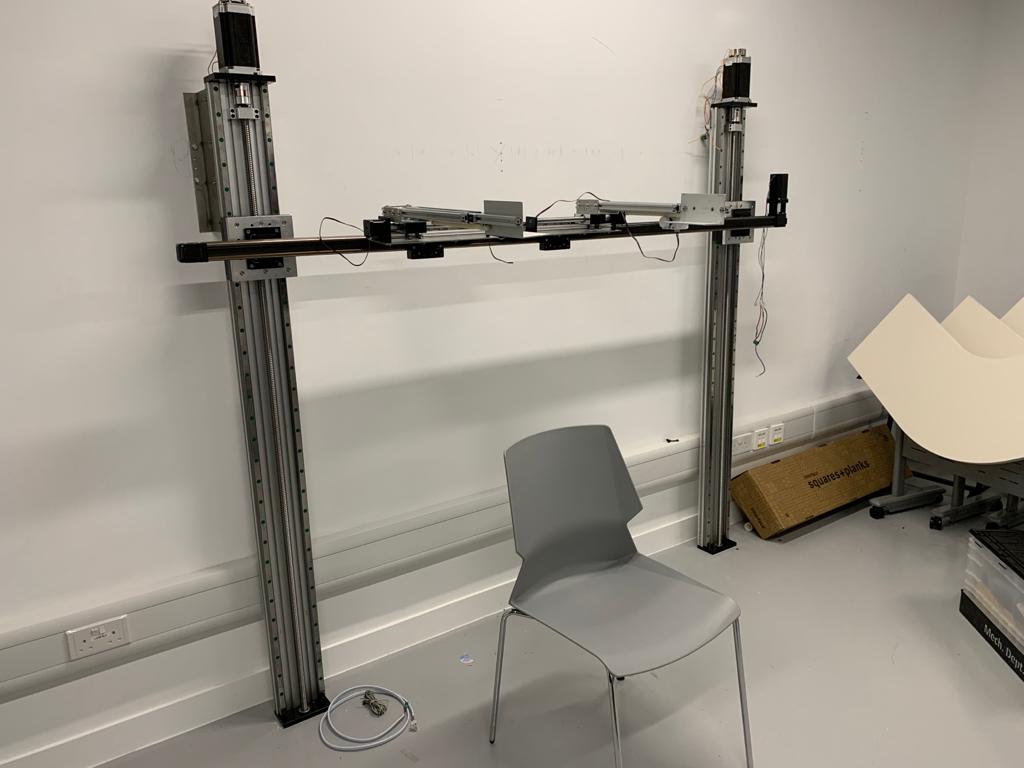 Automation is becoming much popular nowadays, ranging from household appliances to large industrial machines. The project of Automatic Chair Stacking System is aimed to showcase the idea of automatic conference room by cooperating with the Automatic Chair Parking System. The systems will be able to set up the conference room and tidy up the chairs without any manpower. The system is built with different types of mechanical drives and Arduino programming. 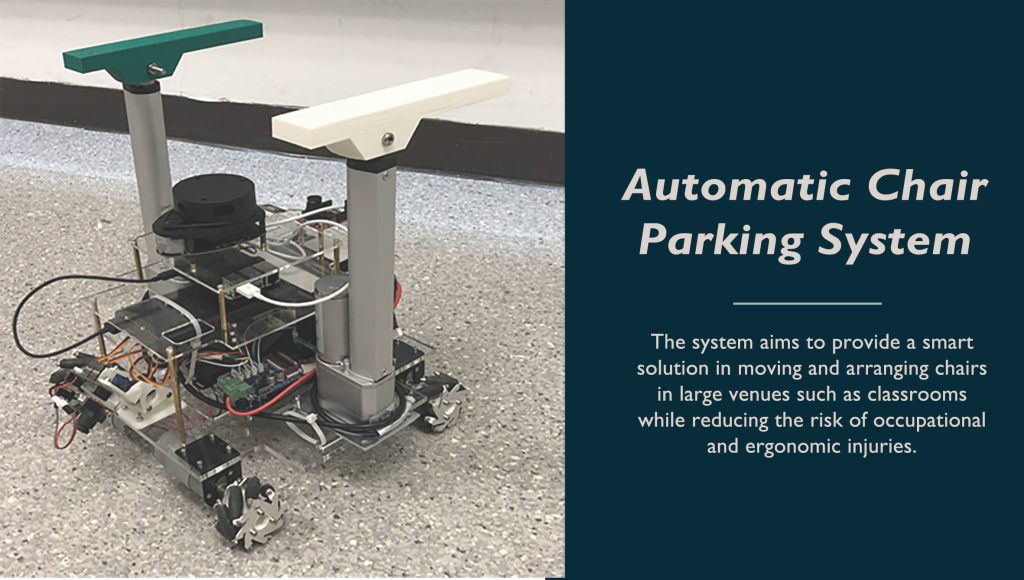 The automatic chair parking system aims to provide a smart solution in
moving and arranging chairs in large venues such as classrooms while
reducing the risk of occupational and ergonomic injuries. This can also
reduce the reliance on labor force and ultimately improve efficiency. The
system therefore is designed to autonomously transport chairs to a
designated parking area with minimal human control. 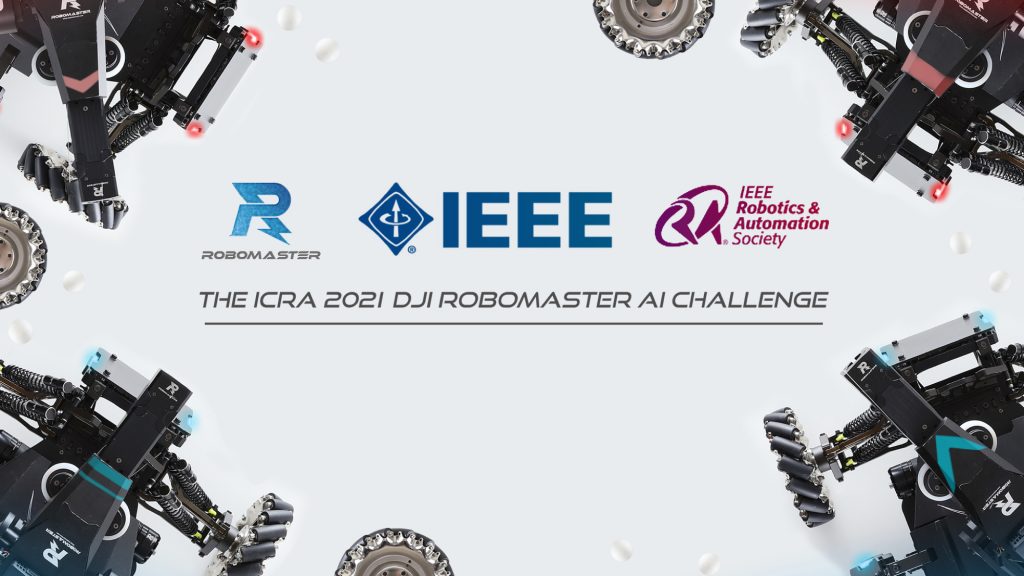 This project is participating the Robomaster ICRA AI challenge which aims to create an automatic small car which can conduct automatic navigation, decision making, auto-aiming (for shooting other robots). During the competition, robots will automatically navigate in an 8m * 4m competition region with barriers, localize itself, find the enemy robot, aim at its armor, and shoot it! 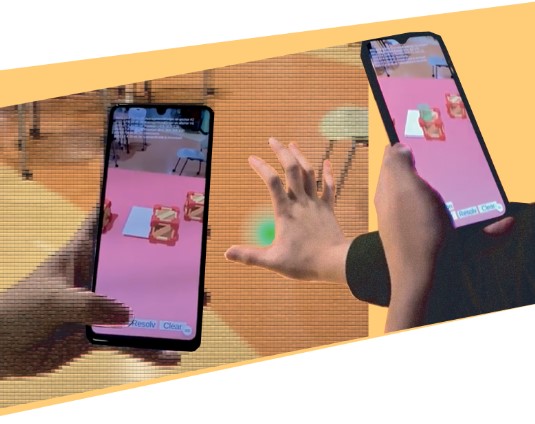 “With the increasing popularity and computation power of mobile devices, AR (Augmented reality) is more accessible. Video games, especially mobile games, can utilize AR technology to provide an immersive user experience. However, currently, most of the Mobile AR game usually lacks interactions between users and virtual objects due to the limited size and control interface of the device, nor can provide synchronized multiplayer expensive.

This project is to develop an AR interactive mobile game prototype that includes hand gesture control and world map sharing. We expect this technology can be applied in the education realm in the future.”